Pokémon GO has taken the world by storm. Since its release on July 6, the augmented reality app has caught the attention of millions around the globe, with 23 million daily active users in the U.S. alone.

With the aim to "Catch 'Em All," Pokémon GO users spend an average of 43 minutes per day on the game (as of July 8). Just as in the original games, some Pokémon are rarer than others - and may take a bit longer to catch or evolve to in order to complete your Pokédex.

Is it really easier to evolve a Pokémon than find the rarer later stage? Or are your chances better out hunting instead of collecting candy?

Thanks to PokéAssitant and Serebii.net for data and Reddit user aem323 for inspiration for a cumulative probability formula, I was able to calculate the probability of catching or evolving to each of the 151 Pokémon. 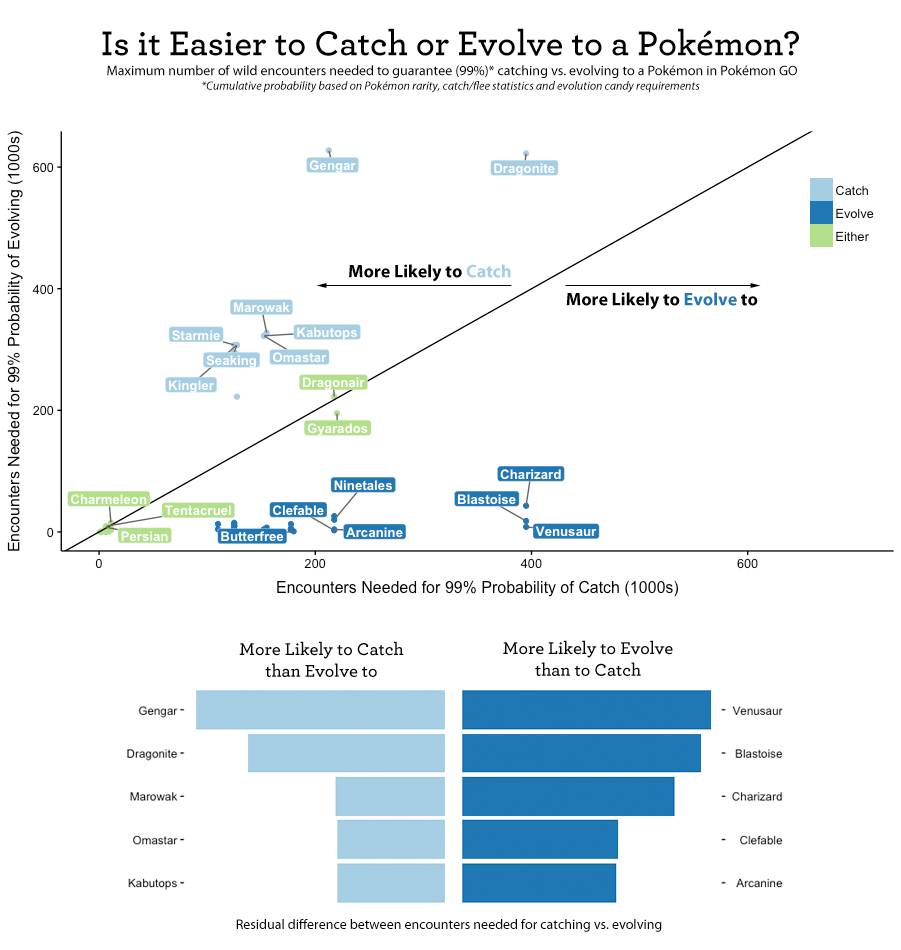 The chart above compares the total number of wild encounters needed to guarantee a catch or evolution to a Pokémon using cumulative binomial probability.1,2,3 This uses the chance of catching the Pokémon on any given wild encounter and the probability of catching lower-stage Pokémon to get enough candies to evolve.

That means that it could take almost 400,000 total wild Pokémon encounters to find and catch a Venusaur, but you could evolve to one in a fraction of the time.

There are many factors that go into catching a Pokémon: your location and special items like Ultraballs or razz berries, and statistics like its rarity and its base catch and flee rates. For this analysis, only the base statistics were used.

The chart below shows the probability1 of catching a certain Pokémon (within 5 throws) on any one wild encounter. 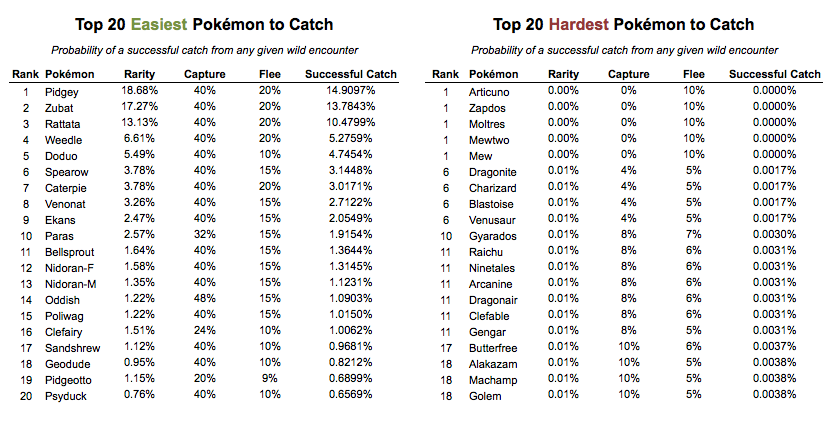 Pidgey is the most common and easiest Pokémon to find and catch, which supports the Pidgey-churning strategy some users employ to gain XP.

The legendary birds Articuno, Zapdos and Moltres (which may be impossible to catch and instead special giveaways), along with Mew and Mewtwo top the list of most difficult Pokémon to catch. No catches have been reported yet.

If your chances of finding and catching a Golem are only 0.0038% on any given encounter, how many encounters should it take you to finally get one?

I looked at the cumulative (binomial) probability2 and found how many wild encounters it could take to guarantee (99%) that you fill that spot in your Pokédex.

Since this takes rarity into account, this is total wild encounters needed - not just encounters with the Pokémon in question. It surely won't take you 42 Pidgey sightings to catch one - but it could take you up to 42 total Pokémon sightings to find and catch one.

The probability for evolving to a Pokémon depends on a few things: how many candies are needed and the probability of catching the number of Pokémon you need with those candies.

For example, you need 12 Pidgey candies to evolve into Pidgeotto, so you need to catch 4 Pidgeys (3 candies each = 9 + 3 trades = 12, evolve the 4th). How many wild encounters would it take to reach 99% probability of catching 4 of them? 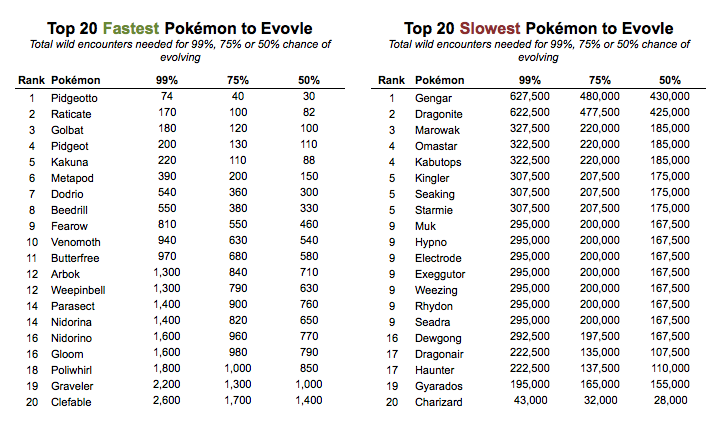 The answer is 74: it could take 74 wild Pokémon encounters to find and catch 4 Pidgeys. Depending on how long you play the game each day and how often you encounter Pokémon, this might take you one day or 3 weeks.

Finding a Charizard could take 395,000 encounters, but evolving to one could be done in 43,000 - so don't give up on those Charmanders.

All code and data can be found in my Github repo.

Which Actors Are Hated by Critics but Loved by Fans?

Billboard has published a Year-End Hot 100 every December since 1958. The…