Women make up just 39% of speaking roles on television and 32% in movies, according to recently released research by the San Diego State University's Center for the Study of Women in Television and Film.

Of those roles, male characters are significantly more likely to be seen working (about 60% of men vs. 45% of women) and to have work-related goals (52% of men vs. 32% of women).

Fargo, the 1996 Coen brothers movie and 2014 FX television series, offers up more than few strong female characters. Some are on the wrong side of the law, like mob matriarch Floyd Gerhardt or parolee Nikki Swango, while some have dedicated themselves to the law, like Marge Gunderson, Molly Solverson, and Gloria Burgle.

Fargo has chosen to focus on female perspectives in law enforcement. How many women work as cops in real life?

To find out, I turned to state salary records, since states are required to provide pay information for government employees. The records don't specify gender, but most do provide first names, which can be used to make an educated guess using the R package gender.

I was able to secure recent salary records for 41 out of 51 states. Five did not have accessible web database, four did not share names out of concern for officer safety, and D.C. has no "state" police force. The retained data focuses on highway patrol, which are employed by the state, rather than police officers, which are employed at a local level. Note: this data comes from 41 sources. It is meant to give a characterization of state police forces - not provide a 100% accurate picture. 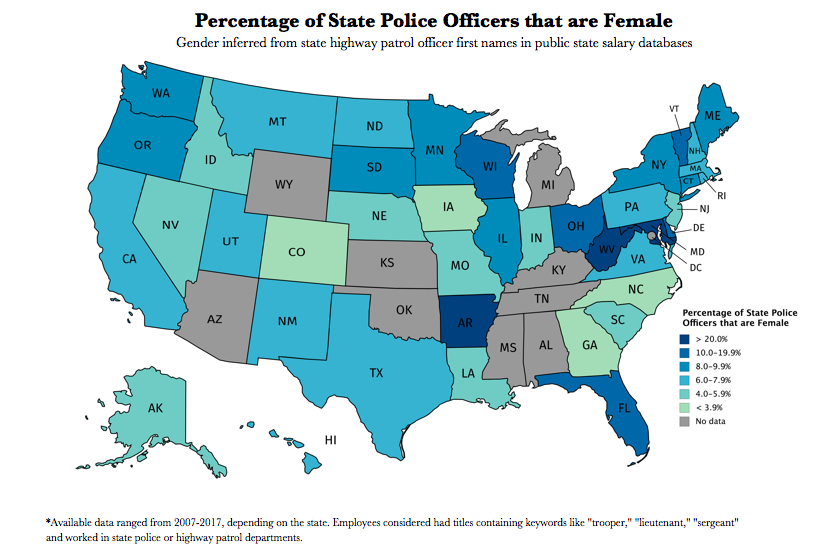 Overall, about 9% of state police officers are women. Of the 50,462 officers* in the final dataset, 4,599 were classified as women based on their first names. This represents an increase from the 6.5% reported by the Bureau of Justice Statistics in 2007.

*For 41/51 states, this figure pretty closely agrees with the 60,380 total police and sheriff's patrol officers employed by state government reported by the Bureau of Labor Statistics in 2016.

Colorado has the largest male-to-female ratio of state police officers, with men outnumbering women 38.5 to 1 in its small (79 officer) department. Georgia, Iowa, North Carolina and Missouri round out the top 5 with more than 20 men for every female officer. Women make up less than 5% of state officers in these areas.

Arkansas offers the best gender balance, with men outnumbering women 2.2 to 1. While 2.2 to 1 sounds better, it still means that female officers only make up 31.5% of the workforce.

A note about the data collection:

This information comes from 41 different sources. Absolutely nothing is standardized between states.

Each state provides the information via a different method (ranging from a neat .csv downloader to a horrible old widget) and a different recency (the dates ranged from 2007 to 2017). Furthermore, each state is organized differently, with state police under Public Safety, Department of Transportation, State Police, or Highway Patrol. Each department has its own titles and position naming conventions. I selected the department closest to a state highway patrol and restricted by the most obvious position names, usually containing "trooper," "sergeant," "highway patrol officer," etc. Finally, I used three different gender classifiers and let them "vote" about which gender to assign to a given first name, but there's sure to be some unaccounted for variability (a female Ryan or a male Ashley, for example).

The full dataset, including a link to each data source, can be found here.

Trilogies are common in sci-fi and fantasy books and movies, fitting nicely…

Actors and Movies with the Most Dialogue

Which movies and characters have the most dialogue? Last April, Polygraph complied…