Which movies and characters have the most dialogue?

Last April, Polygraph complied and analyzed 2,000 screenplays to study gender in film dialogue. This analysis uses their summary dataset (for each movie: its characters, the number of words they spoke, their age, and gender) paired with data scraped from IMDb to match characters to actors, movies and directors. To make sure the results were interpretable and relevant, this analysis is restricted to films with a significant number of IMDb rating votes (13,000).

On average, there are about 9,000 words in a movie script, which means that Casino packs dialogue from more than seven movies into one (albeit, nearly three hours long) feature. 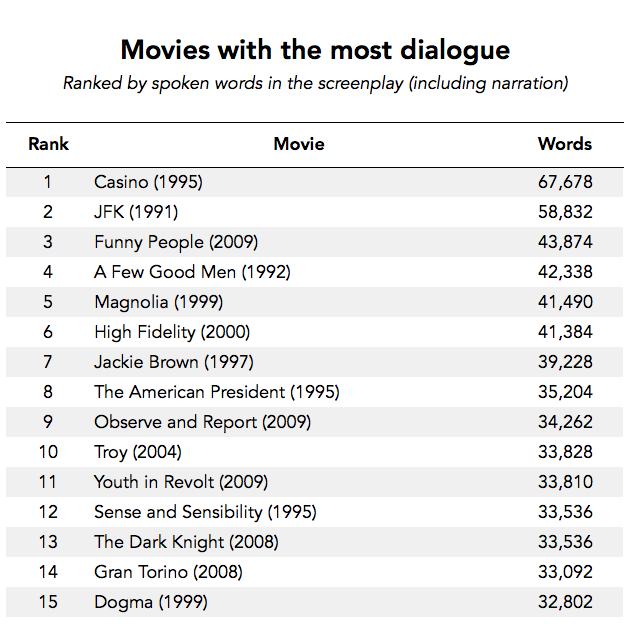 Other dialogue heavy films included comedies like Funny People and Dogma and dramas like JFK and A Few Good Men.

The movie with the fewest spoken words was Son of Saul, a 2015 Hungarian film set in the Auschwitz concentration camp during World War II, winner of Grand Prix at Cannes and Academy Award for Best Foreign Language Film. 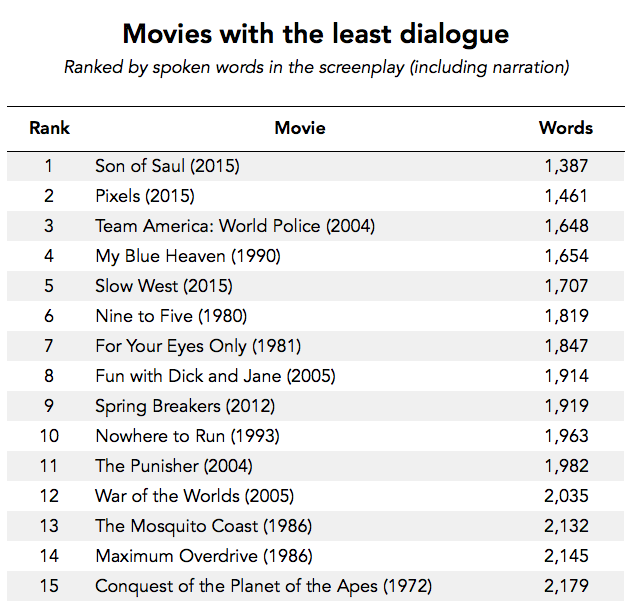 The rest of the films with the least dialogue range from action-driven films like western Slow West and Bond flick For Your Eyes Only to thin comedies like Pixels and Fun with Dick and Jane.

Maybe it has to do with genre. Comedies seemingly benefit from fast dialogue peppered with jokes, while dramas and action movies need space and tone to build tension.

Horror movies tend to have the shortest runtimes. Is it as simple as more screen time = more spoken words? Not exactly. 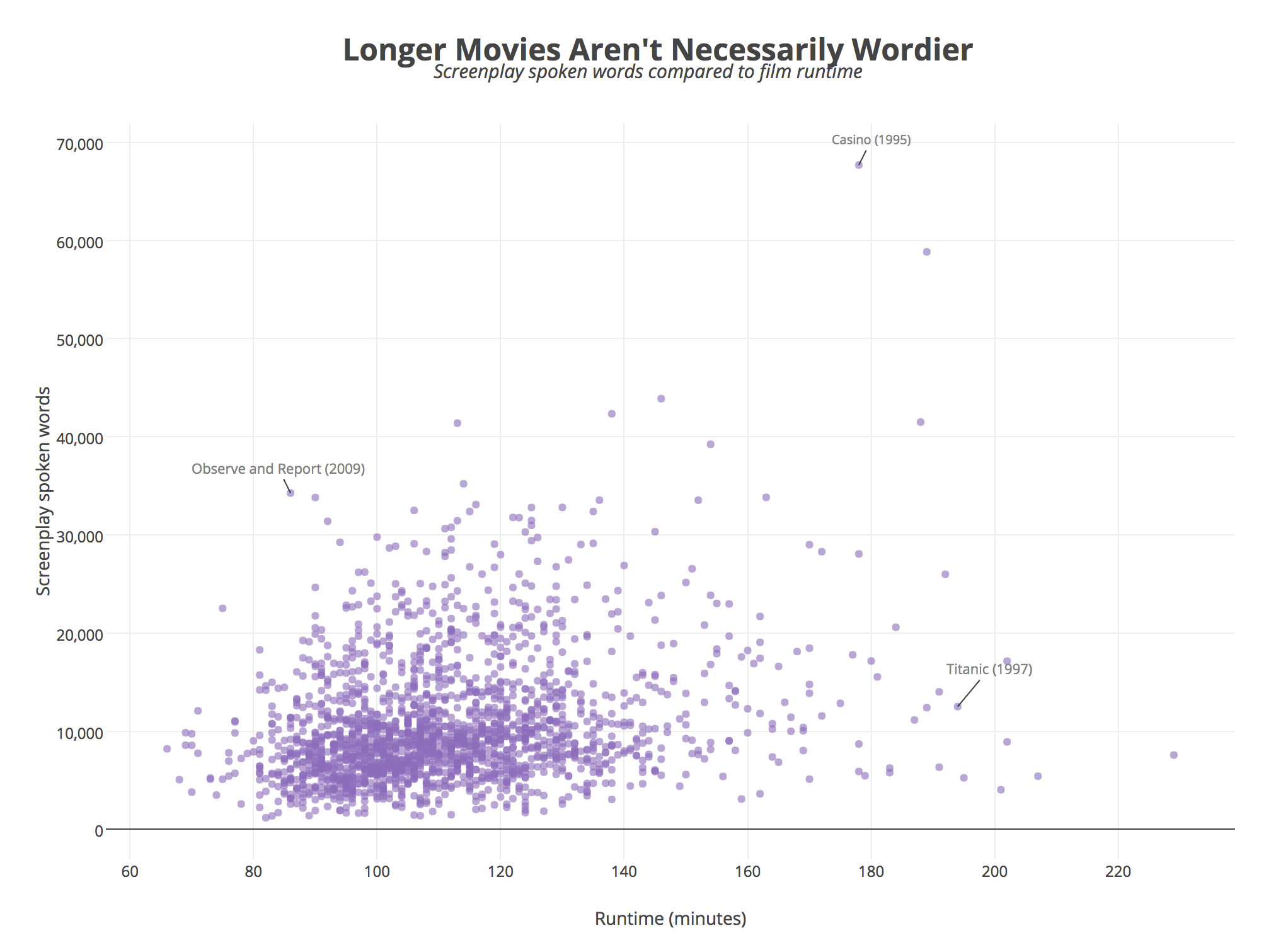 There's a slight trend showing more spoken words with longer runtimes, but it's hardly the rule. Titanic, one the longest movies in our dataset at 3 hours 23 minutes, contains only 12,508 spoken words, while Observe and Report packs 34,262 words into just 1 hour and 26 minutes.

Are there certain directors that produce wordier films? We looked at directors with at least 6 movies in the dataset to find out.

With dialogue-heavy comedies like Dogma, Chasing Amy, and Clerks, Kevin Smith has the wordiest body of work with a median 24,108 words per movie.

Most directors cover a wide span of wordiness in their work. Smith clearly makes two types of movies: the dialogue-driven like Clerks and the thinner set with less than 10,000 words like Cop Out and Mallrats.

Here's a look at where each director's films fall. 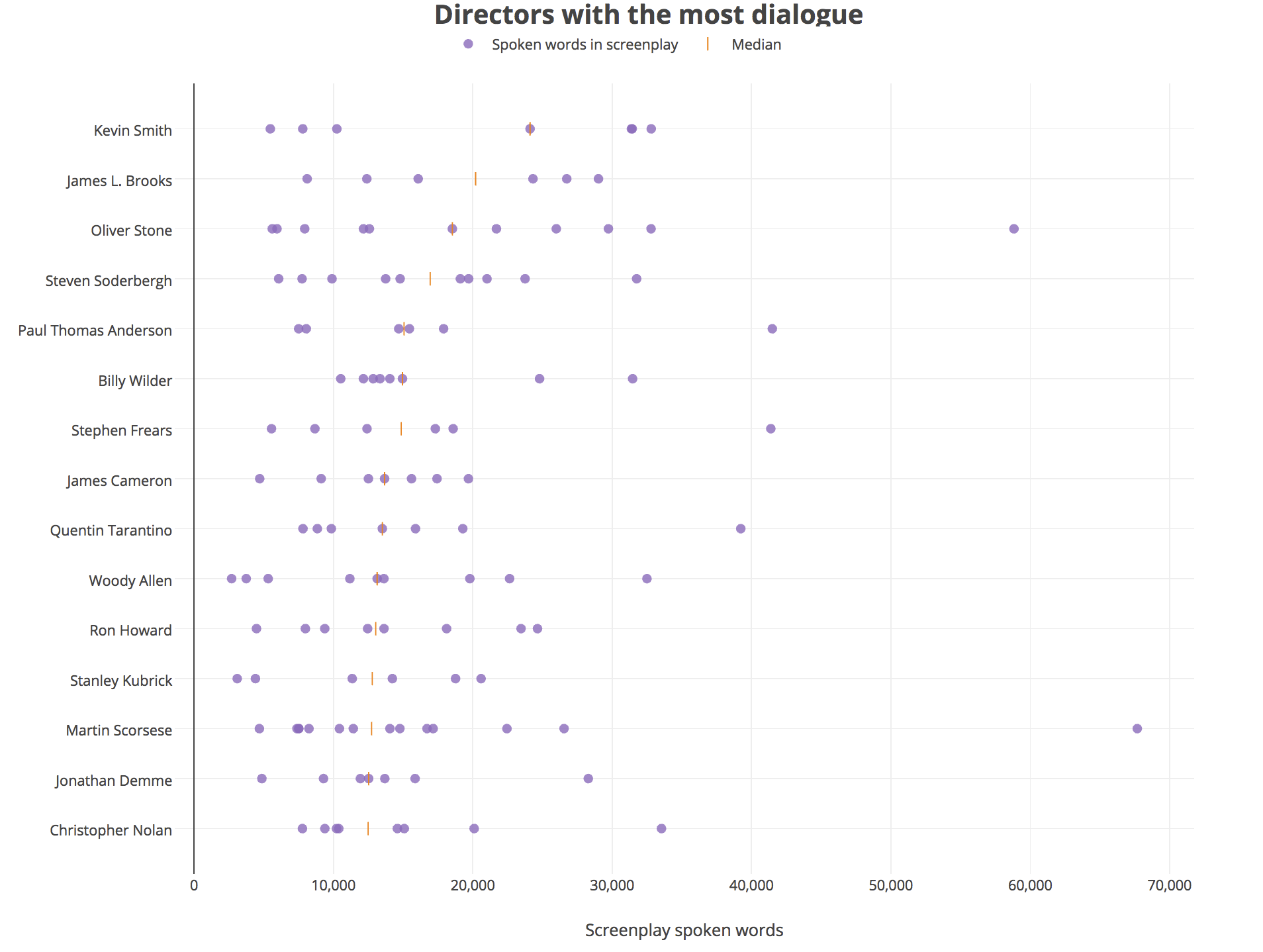 In a lot of these films, the dialogue may be driven by a single character, often a narrator, like De Niro's "Ace" in Casino and Seth Rogen's Ronnie in Observe and Report. 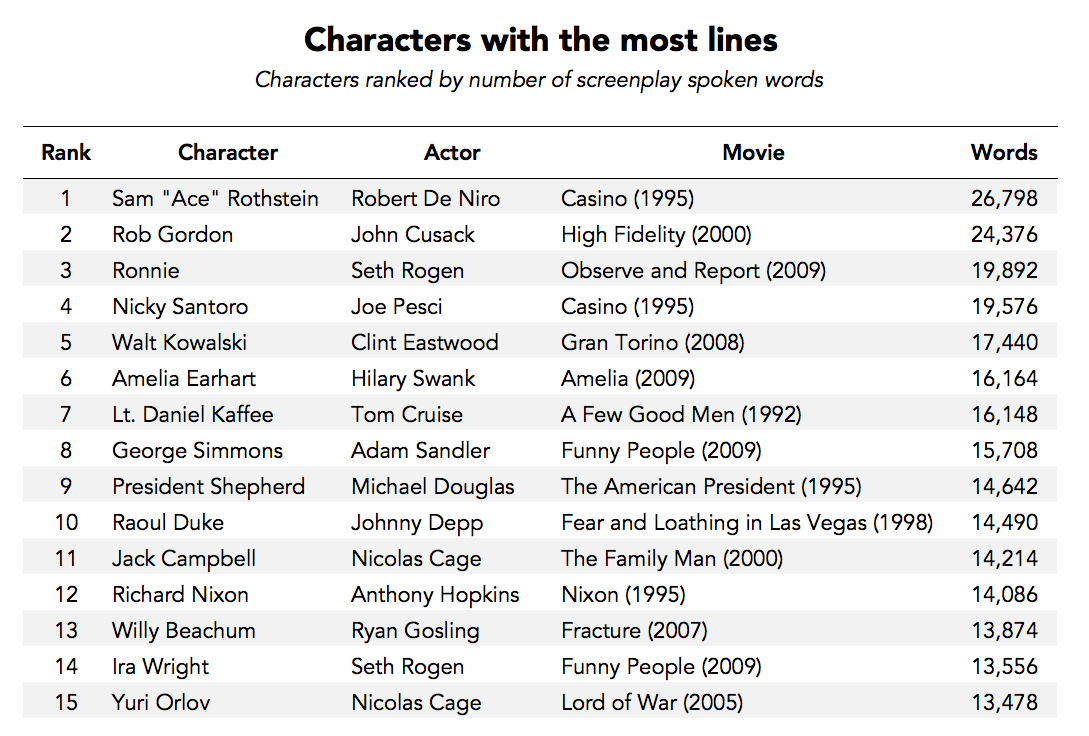 Titular characters also take the lion's share of the dialogue, like Hilary Swank in Amelia, Michael Douglas in The American President, and Nicolas Cage in The Family Man and Lord of War.

Do certain actors gravitate toward wordier scripts? Here's a look at median character words per screenplay for actors with at least 10 films in the dataset. 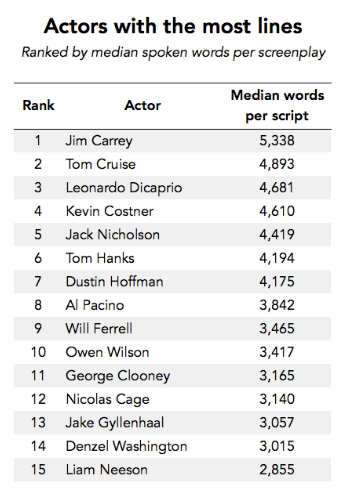 Jim Carrey comes in at #1 with more than 5,000 median words per script. Once again, the wordiness of scripts varies widely by actor. Though Tom Cruise has the verbose Lt. Daniel Kafee in A Few Good Men, Carrey is more consistently wordy across his filmography.

If you want a wordy flick, you should seek out a crime movie directed by Kevin Smith and starring Jim Carrey (though we can only hope that combination never sees the light of day).

Less Than 10% of State Troopers are Women

Rockin' Around the Christmas Radio

As of December 21, Radio Locator shows that more than 350 stations…